Faces of The Fellowship

Eighty-eight year old Chaka lives alone in the former Soviet Union (FSU) and relies on The Fellowship to survive.

Only 11 years old when World War II broke out, Chaka’s life was turned upside down. Her father was drafted into the army, and Chaka and her mother were evacuated to Turkmenistan from Moldova, where they spent four long, arduous years.

The family returned home in 1945. Chaka attended school and then spent many years working as an accountant in the Department for Cultural Affairs. Despite her many years of service, her pension is only $90 per month.

Chaka lives alone in a shabby, ancient wooden house with only old photographs to keep her company. Her backyard was once a beautiful garden, but now lays barren. Remarkably, although Chaka’s home and health are both deteriorating, her powerful personality is not.

Because of her age and her various physical conditions – Chaka suffers from hypertension, arthritis, and heart problems – she is unable to leave her house.

Thankfully, she can rely on The Fellowship’s aid, including deliveries of food cards, medicine, clothing, winter relief, home repairs, and medical equipment, as well as homecare visits. Thanks to homecare workers and volunteers, Chaka’s health and emotional needs are attended to. Her small house is frequently filled with young voices, laughter, and a caring energy. These interactions are exactly what she needs to keep her spirits high.

They also help her with basic survival. Her house does not have running water; the only water source is a public well located some distance away. While Chaka’s neighbor allows Chaka to use his well, today Chaka cannot even make it that far. Her Fellowship homecare worker and other volunteers bring Chaka’s water to her – the path to the well is icy and difficult even for them; Chaka would never make it there and back on her own without injuring herself. 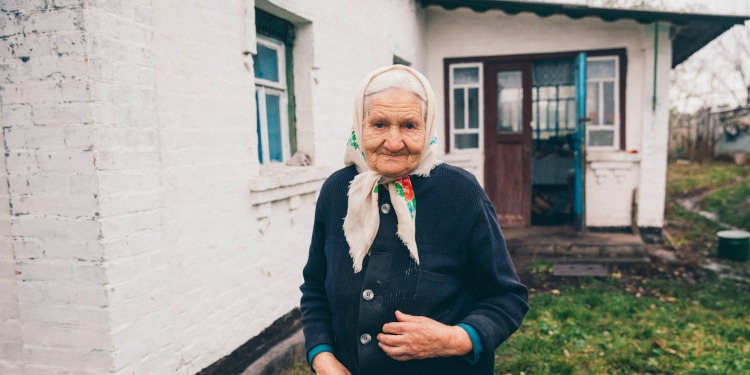 Though she is now 76, Galina still vividly remembers when the Nazis stormed into her family’s home in Ukraine when she was just a young girl.

“They entered our home where we laid still under the beds. We were so scared,” she recalls. “They took our food and left. I asked my mother why they kill young children. She didn’t answer me.”

The Nazis also took their cow, once a source of food and income. Galina remembers “famine and terrible conditions.”

After the war, she went back to school, graduated from 7th grade, and went to work on a collective farm. “I’ve lived my entire life in this village,” she says with a hint of pride.

Galina’s two children live far away, and she does her best to live on a minimal pension. But she is always in need of firewood for heating her modest home in winter, food, warm clothes, and medicines.

She is grateful that The Fellowship’s assistance is now saving her from the hunger and bitter cold that remind her of those awful years during the Holocaust. “Thank you, kind people,” she says emphatically. “God bless you!”